How to Use Internal Flash Memory¶

In embedded systems, it is very important to have a memory which can store the information. Programs (set of instructions) are used to make an embedded system behave in such a manner according to the user requirements. Our programs are written in C or Waijung Blockset which compiles the set of instructions. Microcontroller uses flash memory which can be erased and re-programmed. Some space of the memory can be re-programmed and some space of the memory is fixed (i.e. cannot be re-programmed) and it depends on the manufacturer of the microcontroller how they manages the memory allocations. 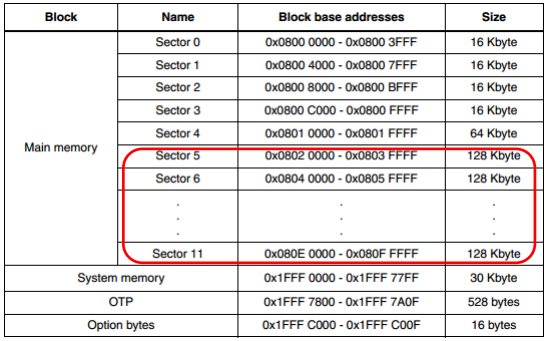 The allocation of internal flash memory of STM32F407 is as follows.

The Waijung library has a blockset for using Internal Flash Memory Block having an option of erasing read and write data. The use is limited from sector 5 to 11.

1.2 How to use Flash Memory Block¶

Simulink library >> Waijung Blockset >> STM32F4 target >> On Peripheral Chip >> FLASH contains a blockset for managing the data in the flash memory. Flash Erase block parameters are shown in Figure 1‑2 which is used for deleting the data from the sectors. It takes about 1 to 2 seconds to erase the data from 128 KB memory [2, p. 106]. 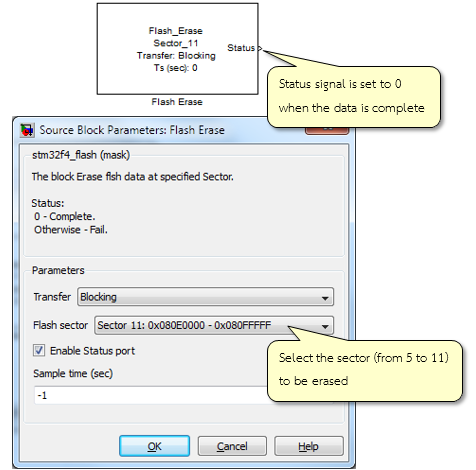 Block parameters of Flash Read are shown in Figure 1‑3. It is used to read the data from specified memory. For example, if used wants to read the address: 0x080E0500, following are the steps. 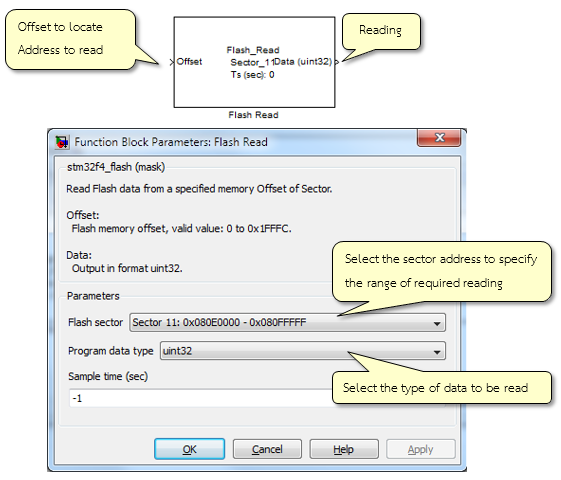 Flash Write block is shown in Figure 1-4. It is used for write data to the memory offset of specific sector id. The procedure for assigning the address and specifying the offset address is same as that of Flash Read Block as described above.

Figure 1-4: Characteristics of Flash Back Block

2.1 Equipment used in the Experiment¶

2.2 Experiment for Saving and Deleting Data¶ 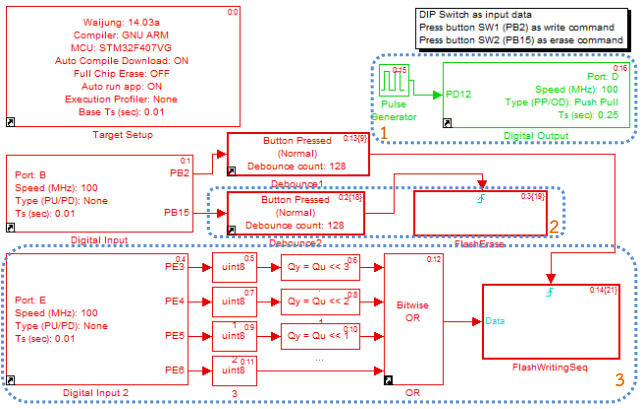 Figure 2-1: Simulink model for writing and erasing the data from flash memory

This experiment is conducted to write or erase flash memory address at 0x080E0500 using Simulink model as shown in Figure 1‑1 which consists of a three major blocks.

While writing in the flash memory, it is good to erase the already existing information on that sector which can be done by using Flash Erase Block which will delete the information of the entire sector.

After the Simulink model is downloaded into STM32F4DISCOVERY board, LED1 which is connected with PD12 will blink. To observe the changes in the flash memory, this experiment uses STM32 ST-Utility program and have the following main steps. 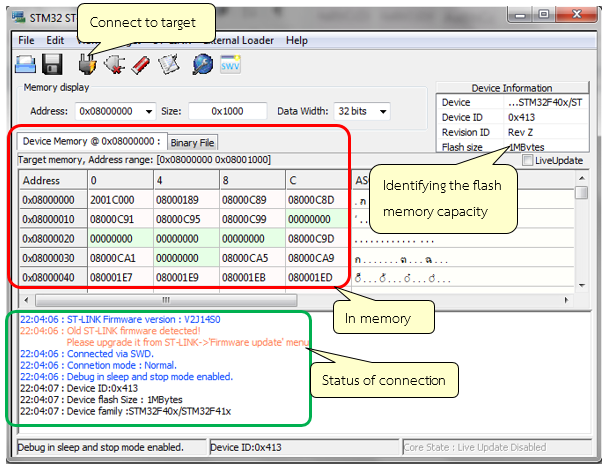 Data in memory will be shown in hexadecimal format in a table form. Rows and columns show the position of address. User can adjust the memory display as follows. 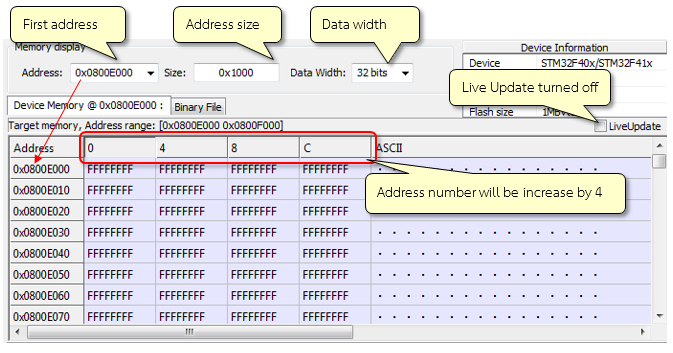 When user set the Data Width = 8 bits on the memory display then the display will change as shown in Figure 2‑7. Now the size of address is 8 bits value (00 to FF).

2.2.3 Experiment with Writing and Erasing¶

Figure 2-8: Windows displaying the data in memory after writing

Figure 2-9: Window displaying the data in memory after deletion 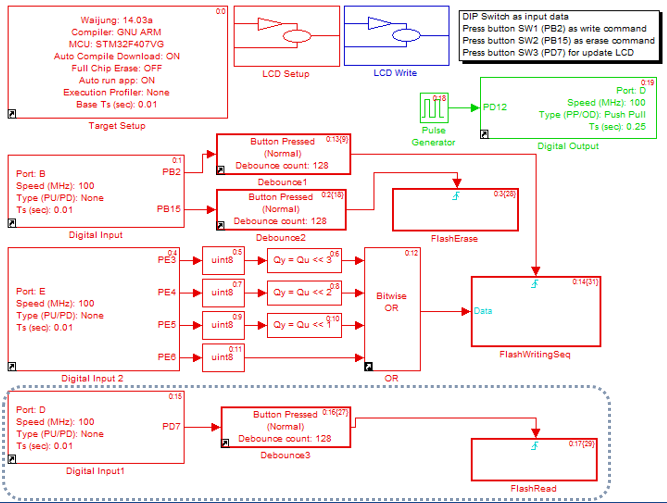 Figure 2-10: Simulink Model for reading data from Flash Memory and displayed through the LCD

If user wants to write multiple data sets, user can edit Block in FlashWriteSeq Subsystem as in Figure 2‑13. In this example, 3 sets of data are written which have different type of variables (uint8, uint32 and single). User can add Flash Write Block and set any address within range of 4 Bytes 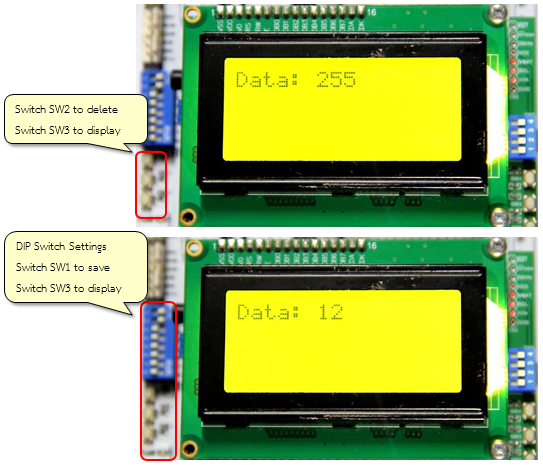 Figure 2-12: Values read from Flash Memory through the LCD display

If user wants to write multiple data sets, user can edit Block in FlashWriteSeq Subsystem as in Figure 2‑13. In this example, 3 sets of data are written which have different type of variables (uint8, uint32 and single). User can add Flash Write Block and set any address within range of 4 Bytes. 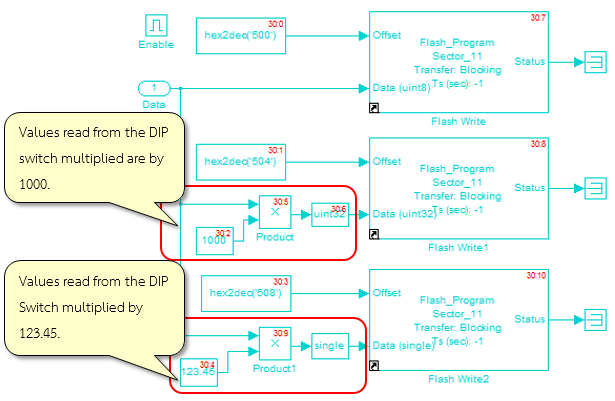 Users can learn how to convert a decimal number to binary floating-point arithmetic from the following link http://www.h-schmidt.net/FloatConverter/IEEE754.html. This is known as IEEE-754 standard.

Figure 2‑15 is an example of subsystem for reading 3 data sets of different type of variables (uint8, uint32 and single). User can add the Flash Read Block and set address that want to read. 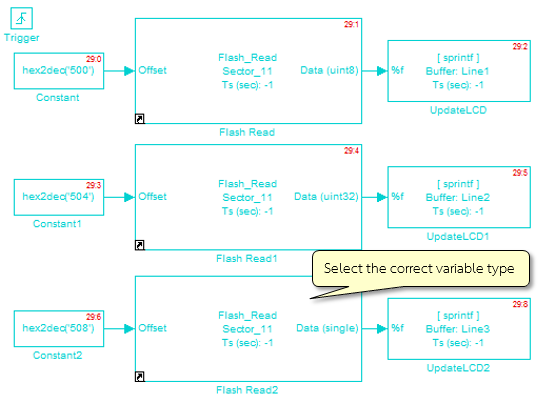 Download the model and information stored in DIP switch, SW1 switch and SW2 switch will be displayed on the LCD display which is shown in Figure 2‑16. 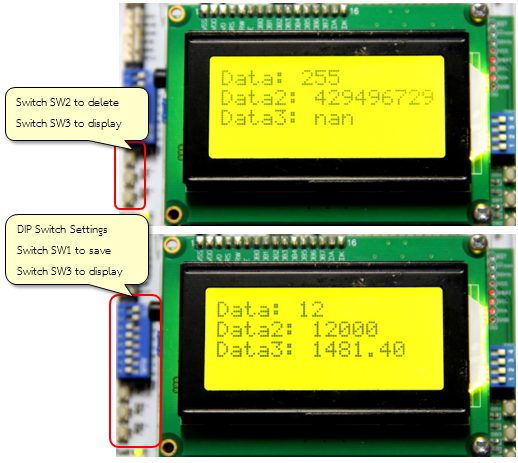 Figure 2-16: Reading value from multiple data sets of flash memory and display it on the LCD

Although user can turn ON-OFF the electric power or download model into STM32F4DISCOVERY again, data in sector 5 – sector 11 will still remain unchanged. So using internal flash memory is suitable for working with data which is not changed so often, for example security or setup section.