How to Use UART Communication Port¶

Communication between microcontroller and external device can be classified into two types:

In STM32F4DISCOVERY, there are many types of communication module UART, I2C, SPI, USB, CAN bus and Ethernet etc. In this section, UART module will be discussed.

The advantages of using asynchronous communication is availability of full duplex communication i.e. it can send and receive data between the transmitter and receiver simultaneously and do not require clock synchronization for data transfer. The universal designation indicates that the data format and transmission speeds are configurable.

Figure 1‑2 shows the format of UART communication with users to define these properties Following are some typical configurations;

In addition, users should consult the voltage level of the signal required by UART communication.

Figure 1‑3 shows the connection between the serial communication Transmit Data (Tx) pin of transmitter with Received Data (Rx) pins of the receiver to send and receive the data. Transmitter and receiver should have a common ground. If the devices are connected with different voltage levels then additional electronic components like MAX232 [2] should be added in path to adjust the voltage level.

The blockset responsible for transfer of data via UART protocol in STM32F4DISCOVERY can be accessed from Simulink library >> Waijung Blockset >> STM32F4 Target >> On Peripheral Chip >> UART consisting of UART setup, UART Tx and UART Rx block

If users want to use UART STM32F4DISCOVERY, then users need to have UART Setup Block in Simulink model.

The UART Setup Block features are shown in Figure 1‑4. In the settings, serial communication port UART module 3 is used and PD8 and PD9 are used for Tx and Rx respectively. Baud rate is set to be 115200 with no parity bit, 1 stop bit. 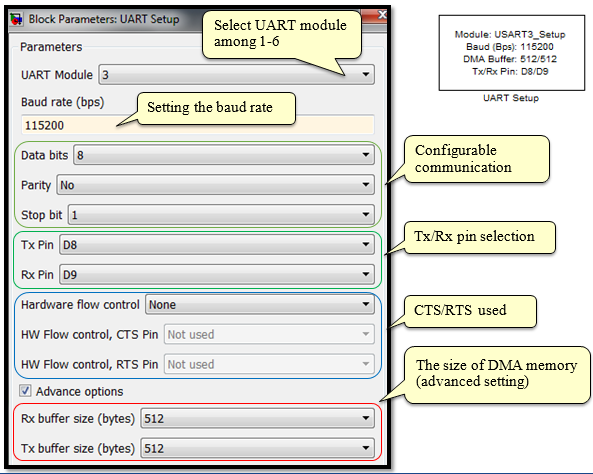 2.1 Equipment used in this Experiment¶

In this section, introduction to aMG USB Converter-N-Adapter is given which has FT2232H high speed USB 2.0 (480 Mbps), a UART/FIFO two channels [3]. Such type of hardware is ideal to be used for Hardware In Loop (HIL) simulation. 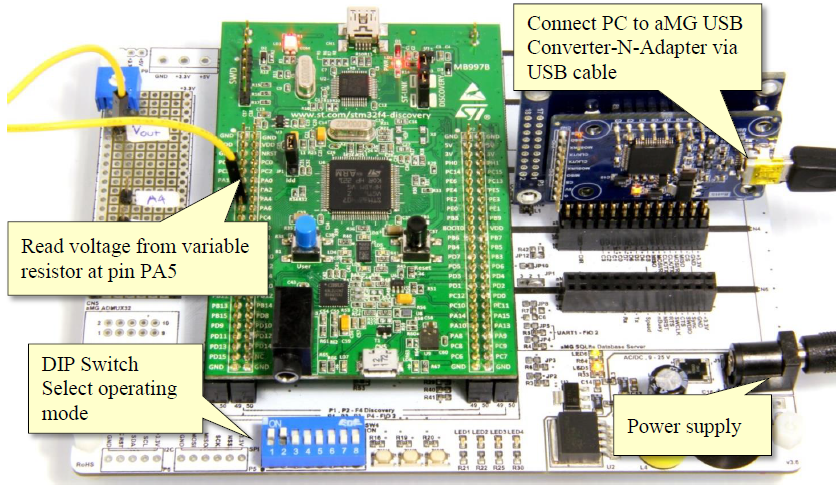 When aMG F4 Connect is connected with the power supply and aMG USB Converter-N Adapter with the PC for the first time, the user must make sure to follow the below mentioned procedure.

Go to Start Menu, right click on Computer icon and selection the properties. A new window will appear as shown in Figure 2‑3.

Go to device manager, expand the Ports (Com & LPT) which is managing the computer’s parallel ports and serial communication which is shown in Figure 2‑4. 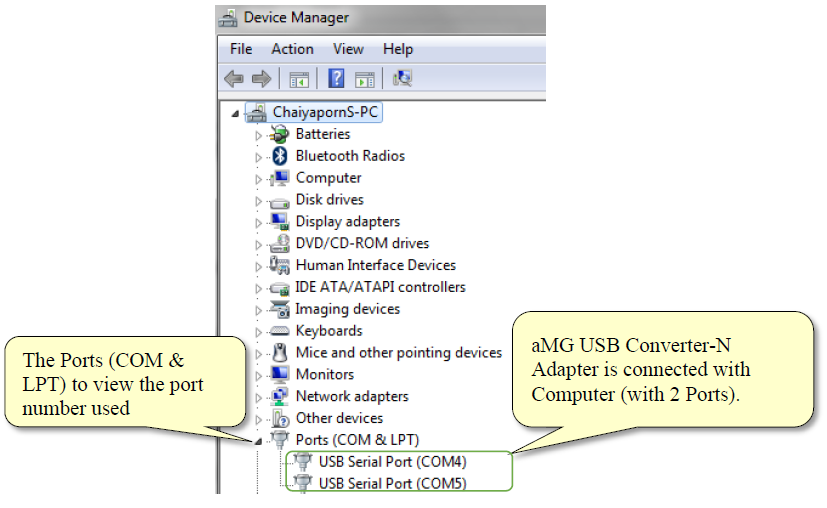 In addition to the above check of port number, the user need to set the Com Port Latency Time to higher speed which will help in improvement of data transmission speed which is essential in Hard in Loop Latency Timer setting. This can be done by following way. 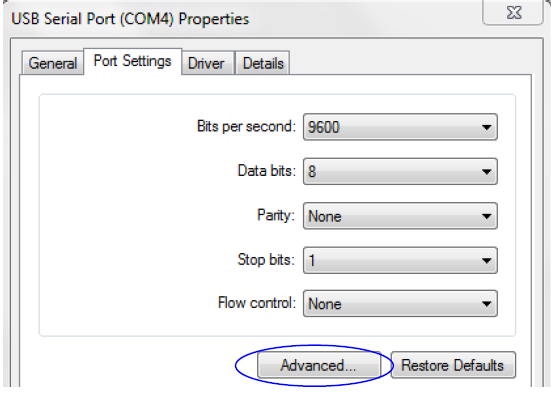 After reviewing the Com Port number and Latency Timer, next is to set the Com Port on the Host Serial Blockset (when using Hard In the Loop Simulation) or serial communications ports. In the next section, we will introduce Freeware programs to communicate through the serial port.

Tera Term is a freeware program which can be used for serial communication. The program can be downloaded from http://www.ayera.com/teraterm/. This program works only with Microsoft Windows operating system. Users can configure the communication ports and the procedure is as follows: 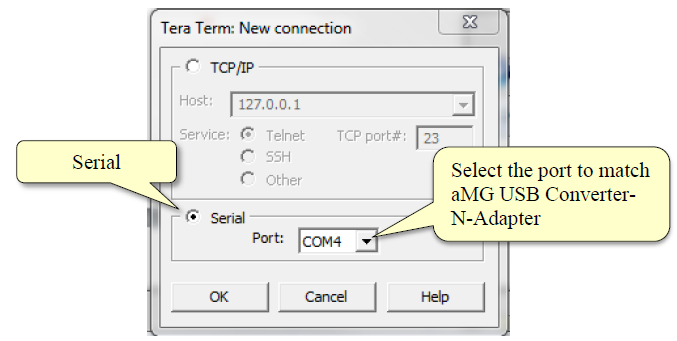 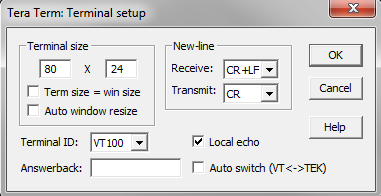 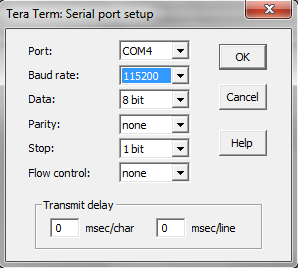 PuTTY is a client program for the SSH, Telnet and Rlogin network protocols. Commands from the clients can be sent to the server through internet via serial communication port. PuTTY can work on Windows and Linux platforms and can be downloaded from http://www.chiark.greenend.org.uk/~sgtatham/putty/download.html 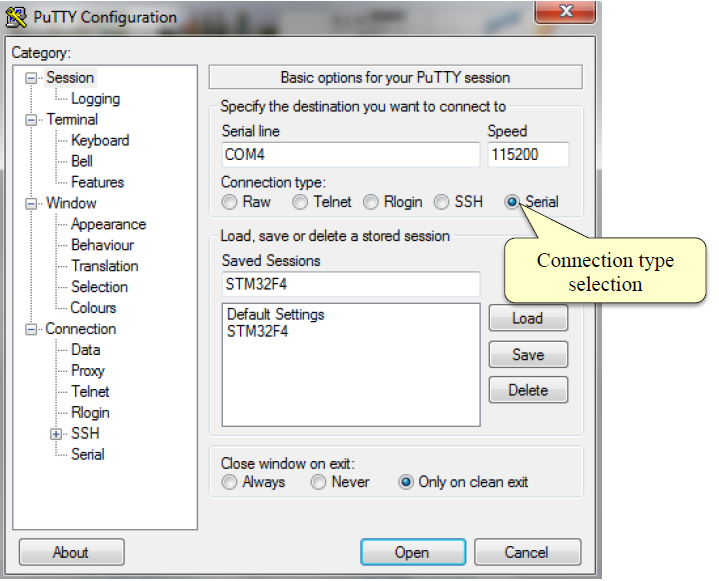 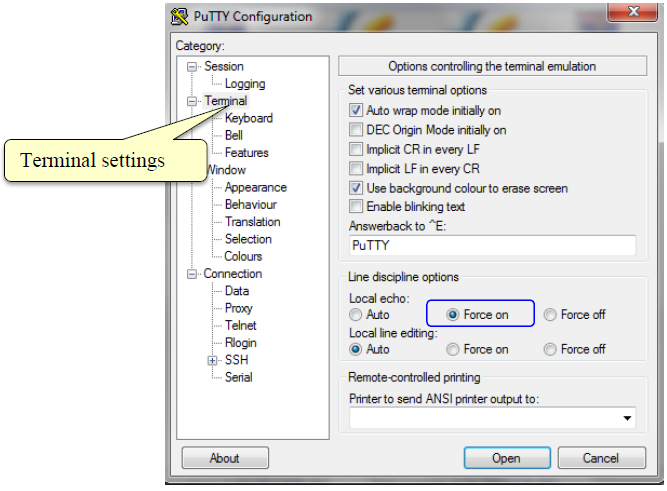 Serial port settings for Putty are shown in Figure 2‑12. The baud rate is set to be 115200 bps with no parity bit and one stop bit. 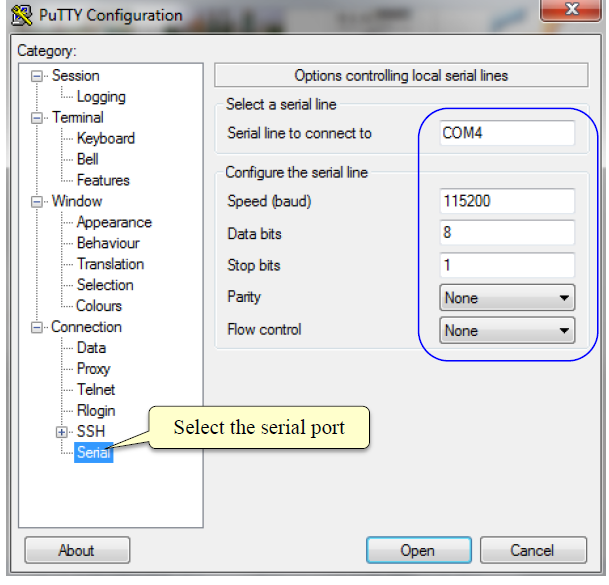 UART Tx Block is used to send data out of the microcontroller to the external devices via Tx pins and provides a convenient way for the transfer of data. There are three Packet Modes available and user can choose any one of them. These modes are ASCII Mode, Binary Mode and String Buffer Mode. 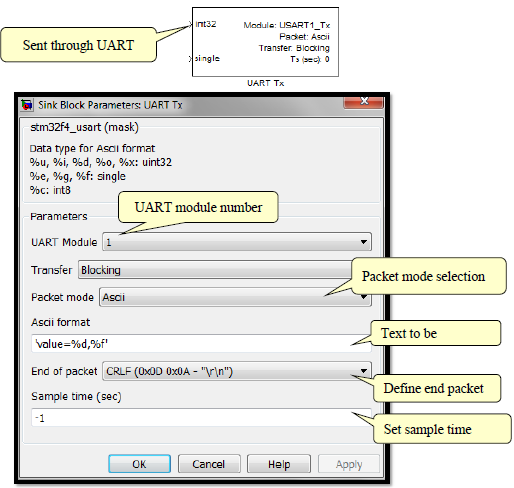 When the program is downloaded in STM32F4DISCOVERY, the text included in ASCII Format Dialog and End of Packet i.e. ‘Greeting from Waijung \n \r \ n’ will appear in Tera Term window and the same message will repeat after every 1 second (sampling time). This is shown in Figure 2‑15. 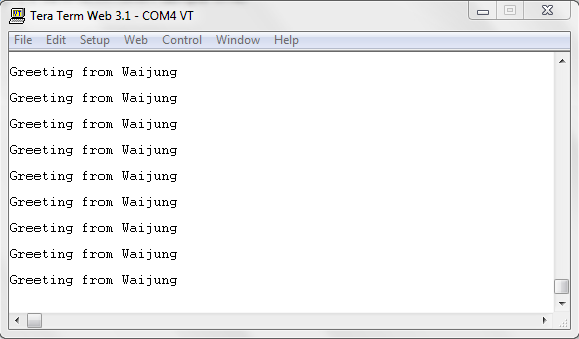 Question : What should be done if user want to set UART Tx Block messages immediately after newline? 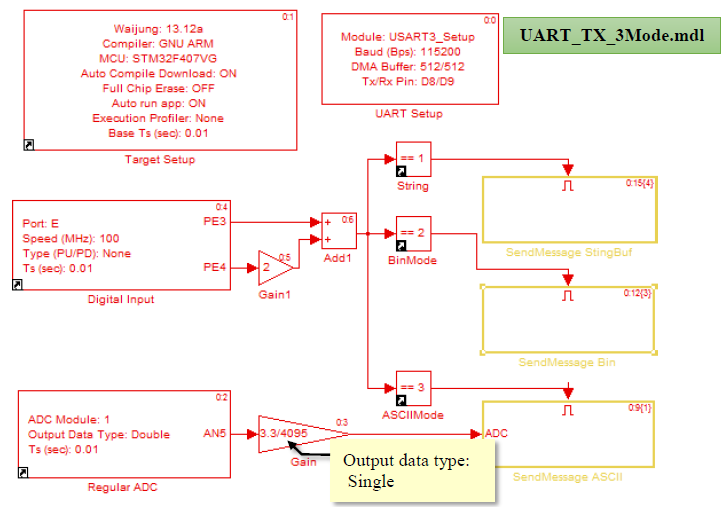 Simulink Model in Figure 2‑16 is an example of the Enable Subsystem for sending messages using Packet Mode or to read the digital signal. Dip-Switch is an optional mode of operation and is functionality is as follows.

When the program is running, the terminal window will display “Greeting from Waijung” every 5 seconds.

When DIP-SW1 is set to OFF and DIP-SW2 is ON signal from the switch activates Sub System “SendMessage Bin”, which is an example of using the UART TX Binary Packet Mode. Figure 2‑18 contains the Sub System.

When the program is running in the TeraTerm window, characters will be displayed after every 1 second as shown in the table without newline (because there is no “\ n” or 0x0A) but begins to the left every time. 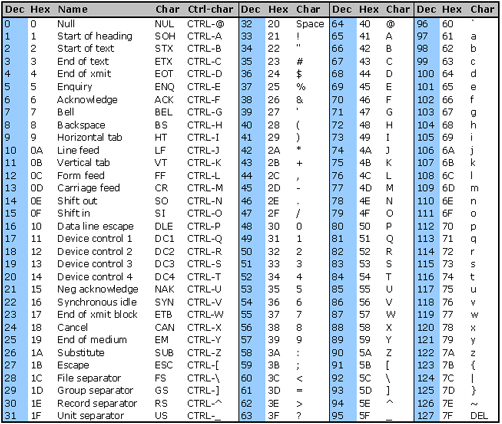 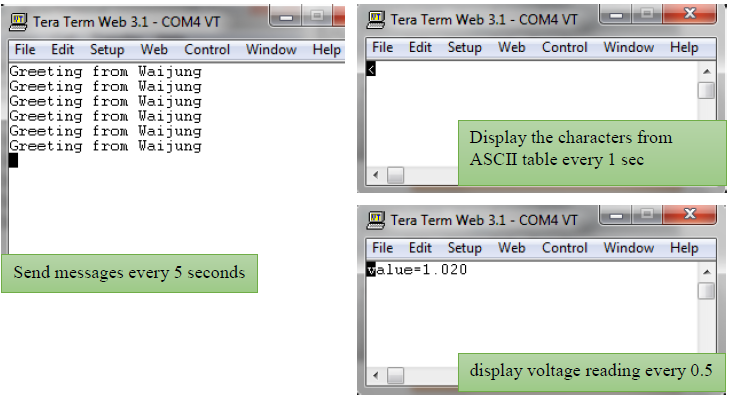 UART Rx Block is used to receive data from external devices through the Rx pins. ASCII mode is selected for the Packet mode however user can choose from the three modes available. 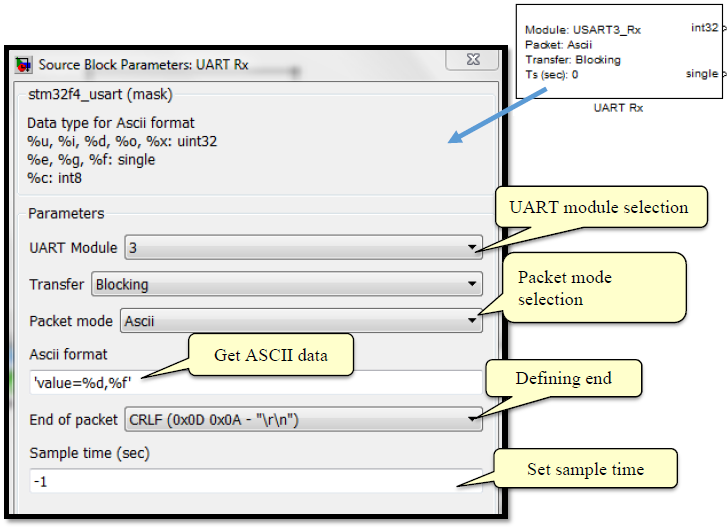 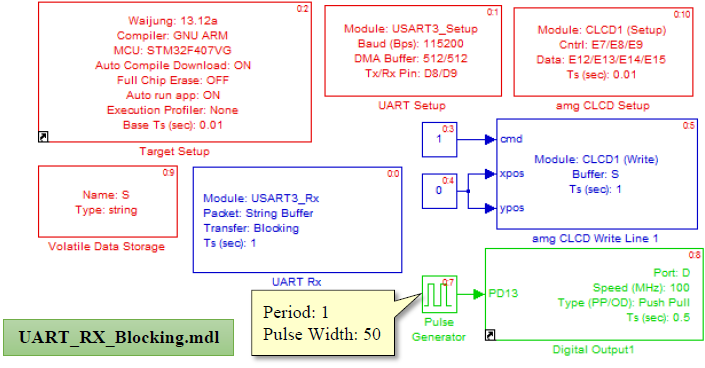 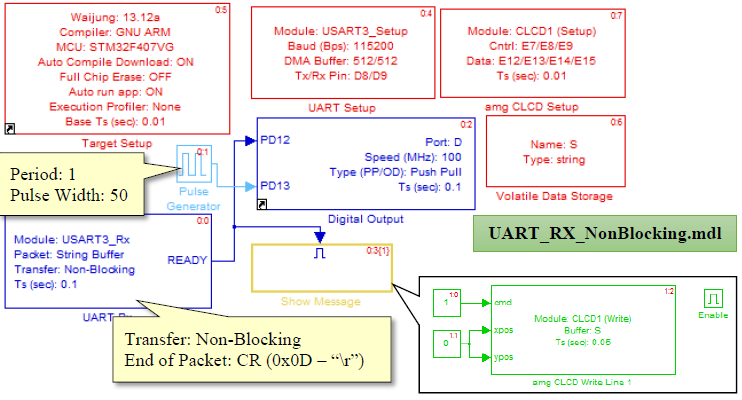 Figure 2‑23 and Figure 2‑24 show Simulink model for the experiment for the transfer of data from computer in Blocking and Non-blocking mode respectively. The Simulink model need to be downloaded into STM32F4DISCOVERY. User can open Tera Term window and type the text “Hello Waijung” on the Terminal window. This message will appear on the LED attached with STM32F4DISCOVERY via USB when Enter key is pressed. This is shown in Figure 2‑25. 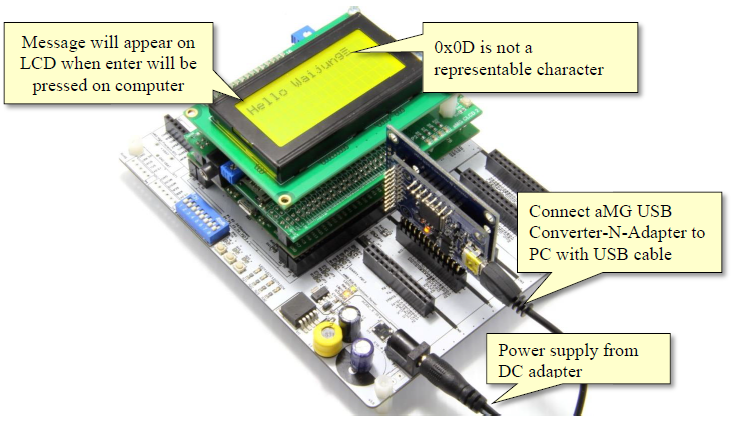 Figure 2 25: Receiving messages from the computer

When user presses Enter to specify that the message is finished, 0x0d will appear on the display but it will not appear on the LCD display of the microcontroller.

In this example, users can observe the different behavior of UART_RX Block with Blocking and Non-Blocking. UART_RX block with blocking wait for completion of the running command before running another therefore LED2 is not flashing.

For the model in Figure 2‑24, when the user selects a UART_Rx Block with Non-Blocking, the ready signal will indicate that the message has been complete. It means that the model can accept other commands while the text is still not complete without blocking the incoming messages (note that LED2 light is flashing). 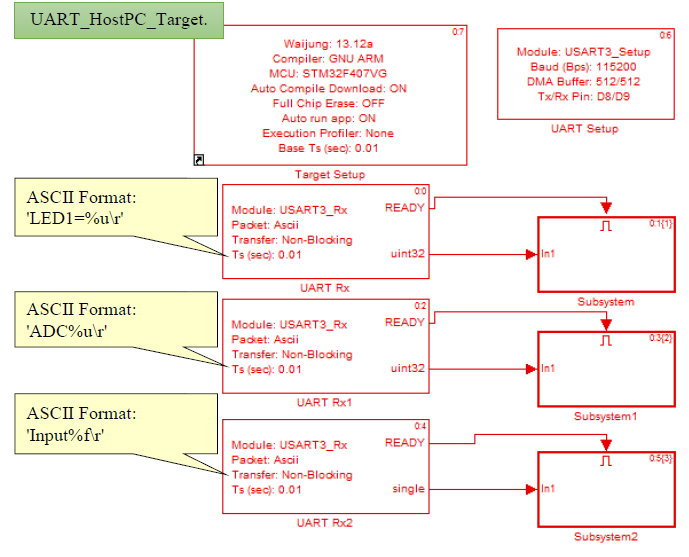 Download Simulink model on STM32F4DISCOVERy and connect with Tera Term. Users can type the following command.

When send command LED1=1, press Enter UART Rx Block check the received message is “LED1=%u\r” which Activate Subsystem Block then the value %u will be sent to Subsystem Block as shown in Figure 2‑27. Inside of the system containing Digital Output Block to control ON/OFF for LED1 that is connected to PD12 pin. LED will be ON if the read value is not equal to zero, so set LED1=0 then Enter, the LED1 will off and UART Tx Block send response “>>OK” to user.

When printing ADC% u? Press Enter UART Rx1 Block, check the messages received is “ADC% u \ r” to Activate Subsystem1 Block then it will display the voltage reading.

When command Input is given followed by a number and then Enter , UART Rx2 Block verify received message “Input%f\r” to Activate Subsystem2 Block and then the read value (%f) will be sent to Subsystem Block as in Figure 2‑29 then prompt the text Your Input is: and the input number.

Figure 2‑30 the message shown on terminal screen of program TerTerm is “>>OK” after ON-OFF the LED. Show value of voltage that read from PA5 and the received number in floating type. 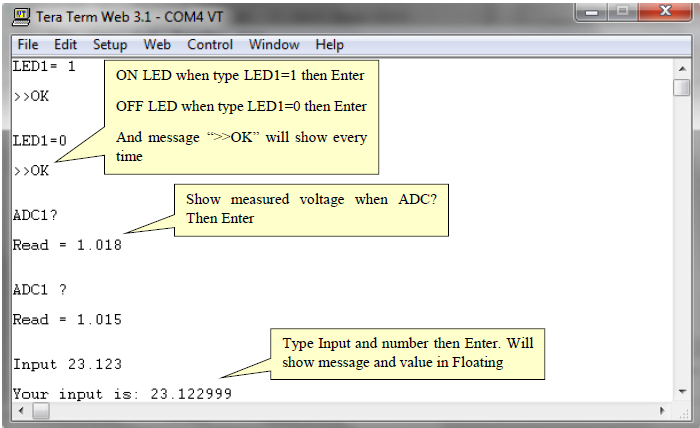 3 Experiment to Demonstrate Communication between Microcontrollers¶

Serial communication between the microcontrollers can happen directly. Therefore, users must make sure that the voltage levels between sender and receiver (in this case both are microcontrollers) are the same. This example use 2 set of microcontroller board. The first board is STM32F4DISCOVERY and the second board is FiO2 that uses microcontroller model STM32F417IG installed on board aMG F4 Connect. Both boards have voltage in serial cable approximately 3.3V.

3.1 Experiment for communication between Microcontrollers in Blocking type.¶

Figure 3‑1: Simulink model for message blocking for board 1

Second board will be receiver. User must download model in Figure 3‑2 into FiO2 that have two blocks of UART RX Block. The first block will receive binary data and the second block will receive Ascii data. Blocks will receive data every 0.01 second. In order to make received data correct, the receiver should have double frequency rate to transmitter.

The received data from UART will use to control ON/OFF LED1 and LED2 on aMG F4 Connect. Both LEDs will blink every 0.25 second.

Figure 3‑2: Simulink model for text blocking on board 2

User can freely choose UART module for send and receive data by selecting module in UART Setup Block then connect Tx-Rx that matched to selected module. Figure 3‑3 shows the serial cable connections between microcontrollers. Both boards use UART Module 1 and 6. 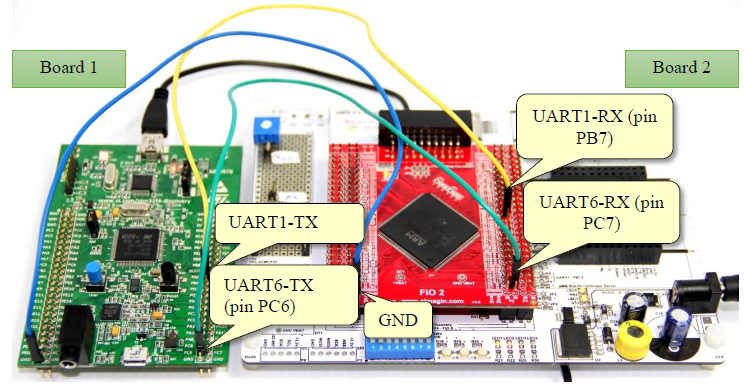 Figure 3‑3: Communication between the microcontrollers (blocking)

3.2 Experiment for Communication between Microcontroller in Non-Blocking type.¶ 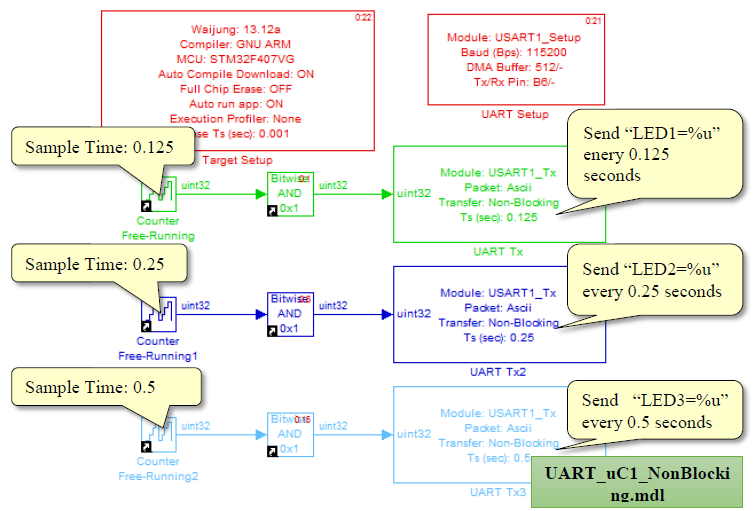 Figure 3‑4: Simulink Model for send data in Non-Blocking type in Board 1

Second board will be a receiver. User must download model in Figure 3‑5 into FiO2 that have 3 blocks of Non-Blocking UART RX Block. Each block will read Ascii data in every 0.001 second. When received the messages value, that value will be used to control ON/OFF LED within Enable Subsystem Block. In order to make the received data correct, the receiver should have double frequency rate to transmitter, same as in Blocking type. 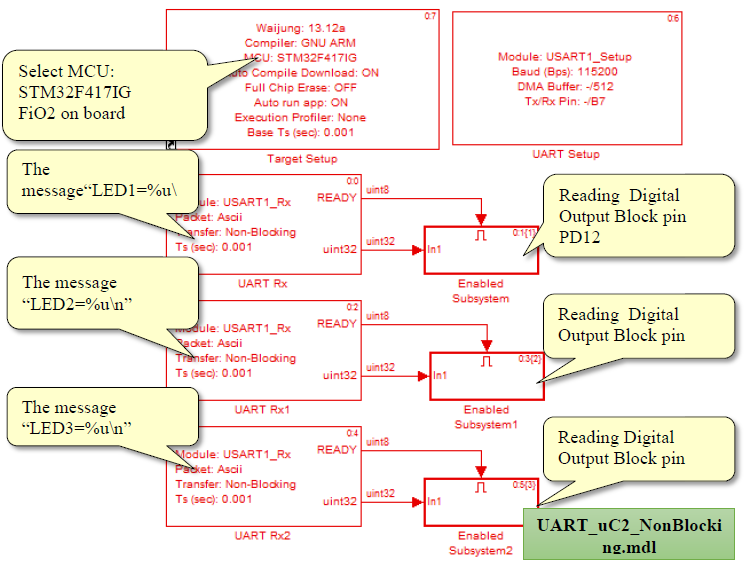 Figure 3‑5: Simulink Model for receive data in Non-Blocking type in Board 2

Figure 3‑6 shows serial connection between microcontroller using UART module 1 for board 1 and board 2. 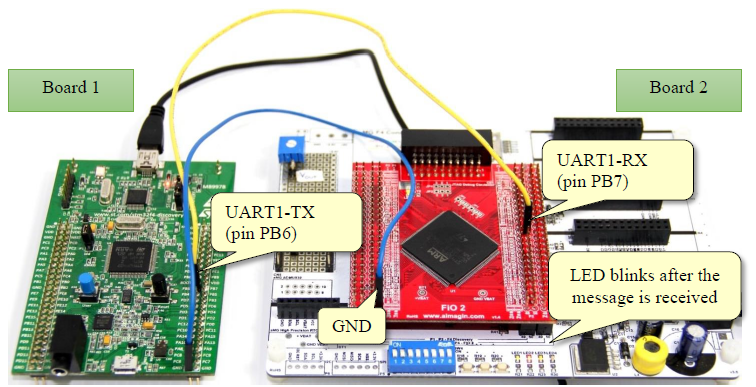