Using Hardware in the Loop with Waijung¶

1 Using Hardware in the Loop with Waijung¶

Hardware-in-the-loop (HIL) simulation is a technique for performing system-level testing of embedded systems in a comprehensive, cost-effective, and repeatable manner [1].

While developing a practical embedded system such as fuel control system in a vehicle i.e. Engine Control Unit (ECU), the developer needs time to design and test system with real vehicle and test the outcome of the system by putting the model in real situations for example what happens if the sensor is malfunctioning/stop working as well as find any possible errors of program. All this testing is to make sure that the system is reliable and the system can handle the problems which could happen. Only then the system/product can be put into commercial use.

The testing period is the most costly time period because the testing equipment is very expensive and it takes a lot of time to analyze the information. It is challenging to reduce the cost and the testing time while still keeping the efficiency of the testing.

The modeling system, Hardware In the Loop (HIL), is one of the most useful technique to design and test embedded system because it covers all the possible situations which can happen and the testing can be repeated many times. This modeling system must be modeled at the real time and must be connected with embedded system that we need to test i.e. embedded system under test (SUT) [1] as shown in Figure 1‑1.

HIL simulation principles can be applied in a number of applications. From the simple applications, such as temperature control systems, the speed of the electric motor to more complex systems such as robotic arms control system or automatic flight of the aircraft and so on.

1.2 Why to use Matlab with HIL test¶

This is an example of modeling of system which controls the speed of rotation of the motor in which a mathematical model reflects the relation between PWM Duty Cycle and the speed of the motor.

The control system of an embedded system need to use discrete-time in which the sample time of the system will have effect on the calculation of the variables of controlling system and the outcome of the modeling system.

Use of Matlab Simulink toolbox allows the development of control system models for embedded systems. After simulating the environment, the discrete time simulation results are compared with the continuous time. 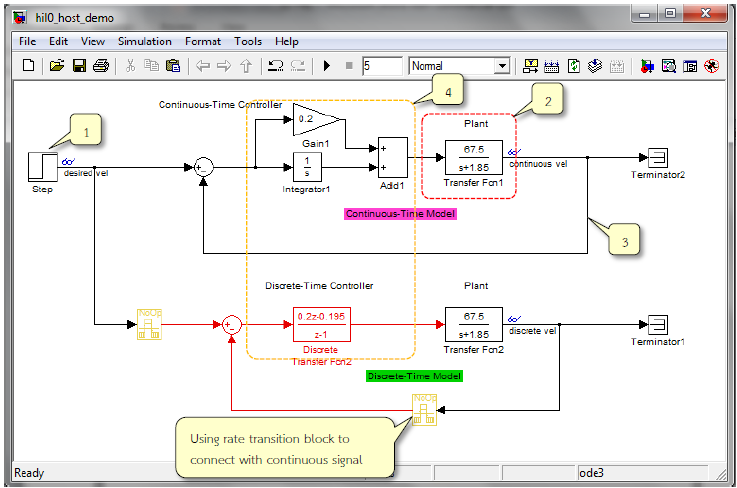 Figure 1-2: Simulink Model for the speed control of the motor spindle

Figure 1‑2 shows the simulation model for speed control of the motor spindle. The functionality is described as below. 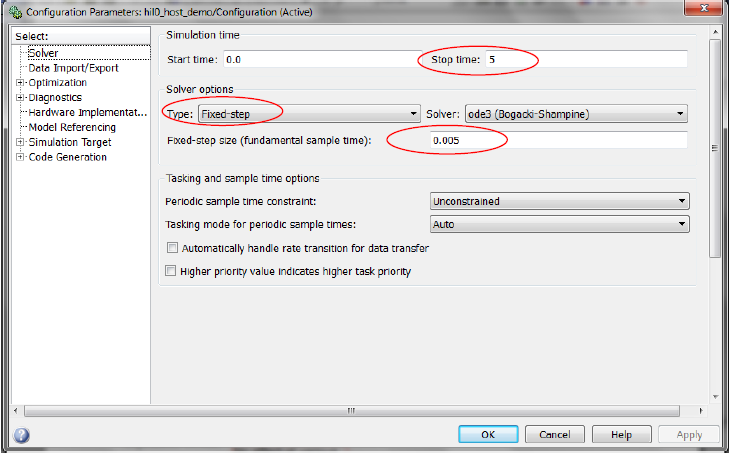 Other parameters should be set as follows. 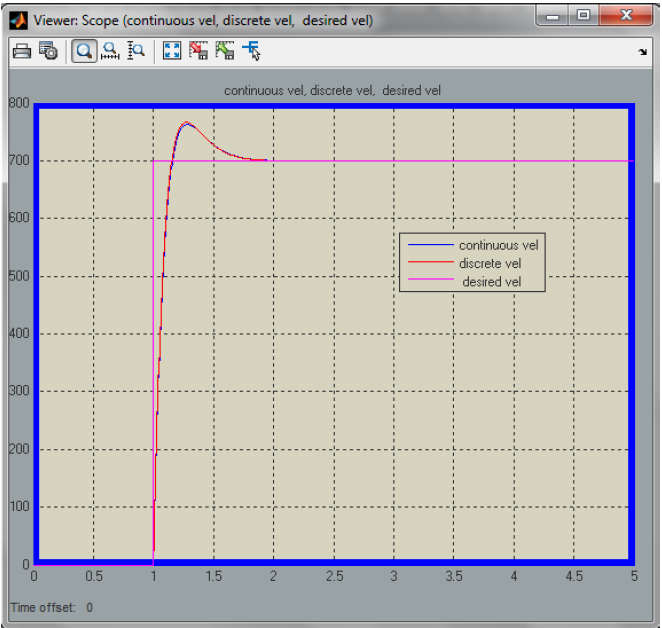 2 Example for Hardware in the Loop¶

Waijung Blockset for the Hardware in the Loop (HIL) simulation examples are 3 of types depending on the application which are described as follows.

2.1 Equipment Used in the Experiment¶ 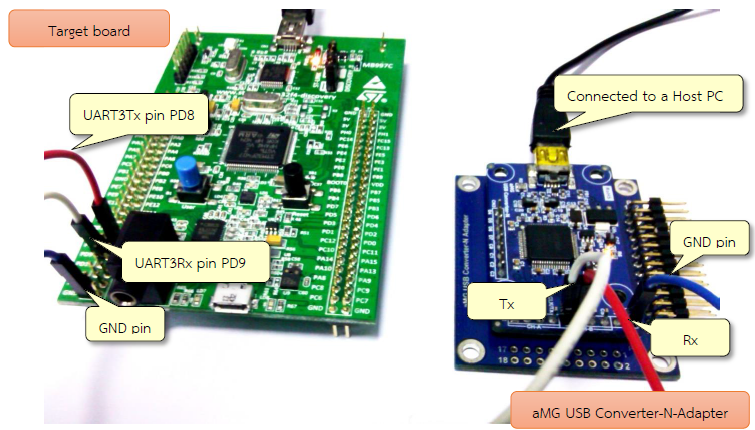 Figure 2-1: Devices used in Hardware In the Loop (HIL)

Figure 2‑1 shows the equipment used in this experiment for Hardware in the Loop which consists of STM32F4DISCOVERY board, a target board and aMG USB Converter-N-Adapter for high speed data transfer.

2.2 Setting up Communication in UART Host and Target¶

To get the most effective results of the simulation, users should set the Host Serial Block (in the host model) and UART Rx / Tx Block (in the target model). Based on the type of HIL, characteristics of Host PC and target are given in Table 2‑1.

Table 2-1: Serial Block on Host PC board and the target 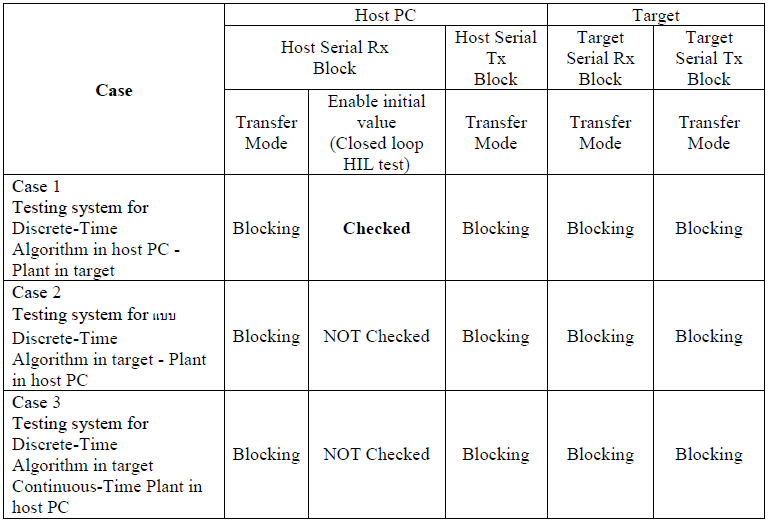 After enabling the initial value (Closed loop HIL test), the host will send the information to the target at the start of the simulation. This ensures that the data transfer between host and target can pick the correct setting as shown in the Case 1 of Table 2‑1. In addition, the user must manually reset Target board before testing in HIL.

In addition, the user must define the format for the data transmission between Host and Target for synchronization. Binary data format is recommended for high speed data transfer. If the computer does not receive data from the target board, then error message will be displayed as shown in Figure 2‑2 when Run Host Model.

Figure 2-2: Host model message if the computer cannot receive information from target board

Simulation of Discrete-Time Algorithm in host PC – Plant in target can be represented as shown in Figure 2‑3.

Download the Simulink model as shown in Figure 2‑4 on STM32F4DISCOVERY. In this example, the plant is a motor. 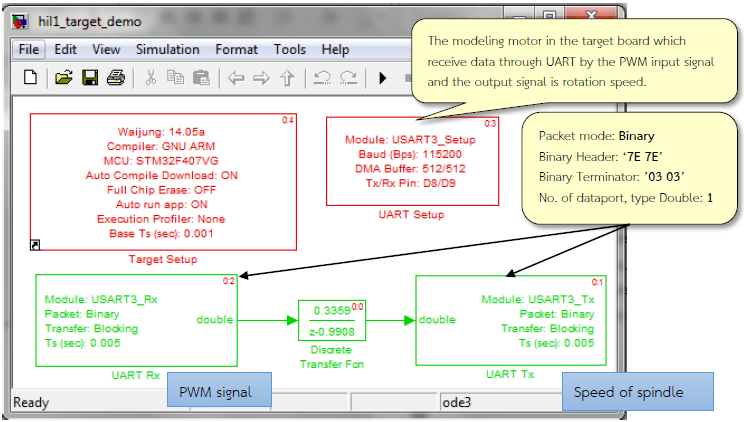 Figure 2-4: Simulink model for motor at Target board 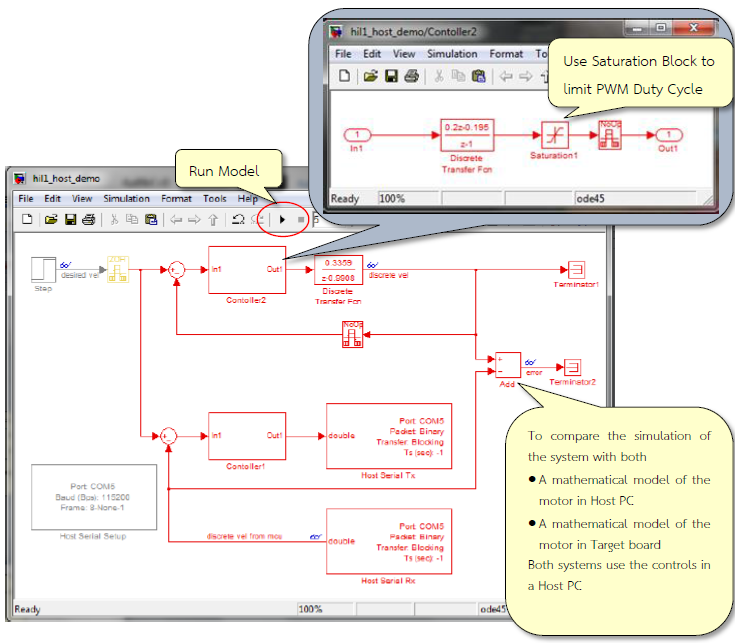 Figure 2-5: Simulink model to control the spindle speed in the Host 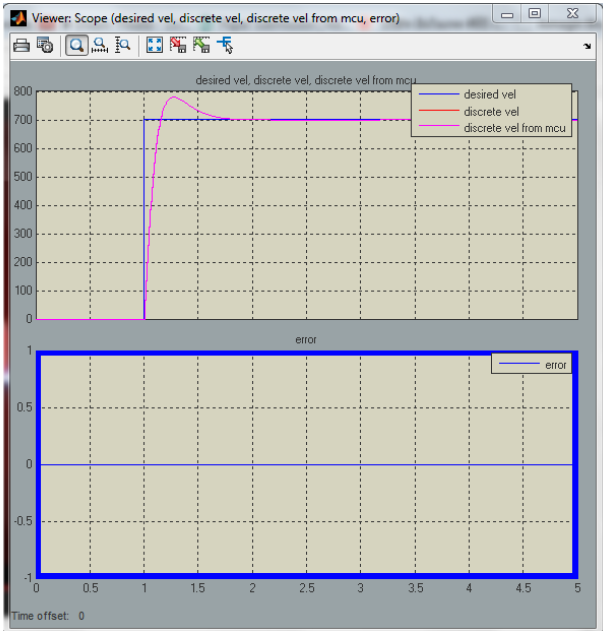 This example shows the speed controlling system in the target board by giving a mathematical modelling of the motor in the host PC as shown in Figure 2-7. 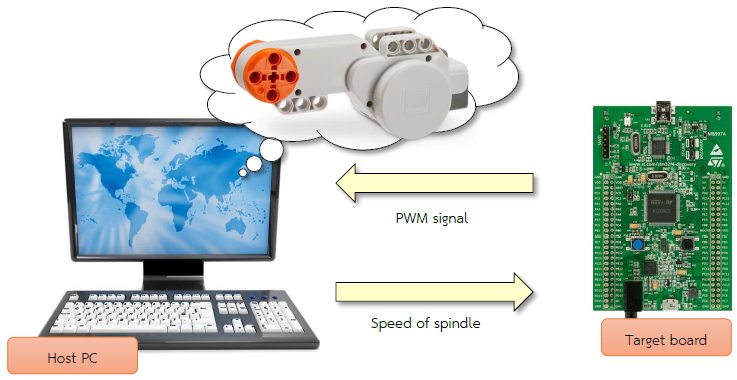 Download the Simulink model on STM32F4DISCOVERY board as shown in Figure 2-4. This model is the controlling system of the motor which receives the desired speed (Set point) and the speed from the modeling (Process Variable) through UART Rx Block and send the instruction (PWM duty cycle) through UART Tx Block. 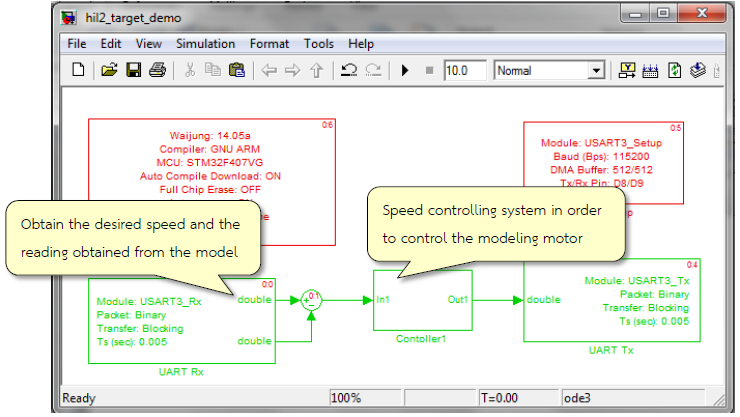 Figure 2-8: Simulink model to control the speed of the motor in the target 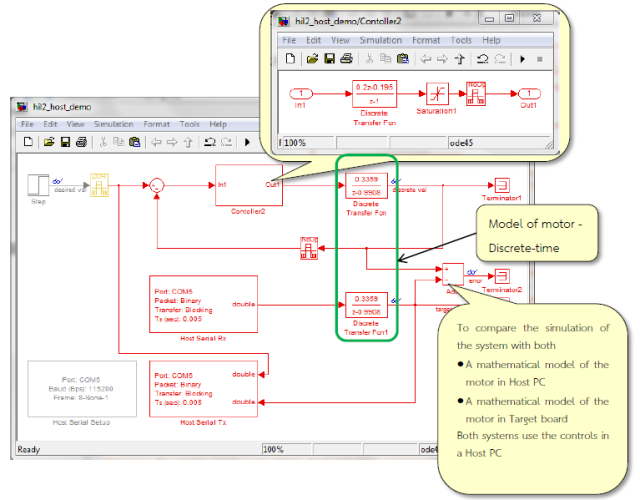 Figure 2-9: Simulink model for motor speed control in the host 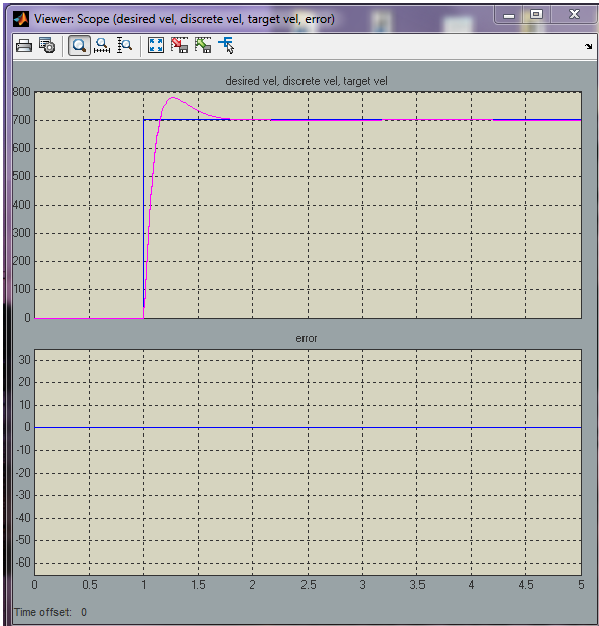 This simulation model is similar to the simulation model for the Case 2 but the mathematical model of the motor in the host PC is changed to continuous time from the discrete time and is shown Figure 2‑11. Algorithm for speed control in the target is shown in Figure 2‑8. 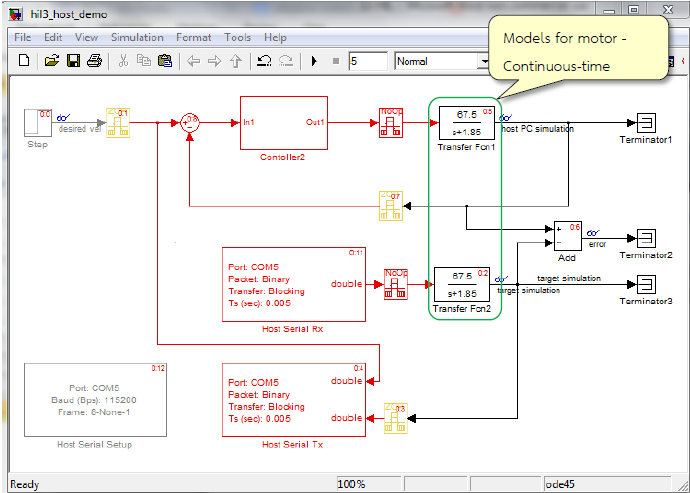 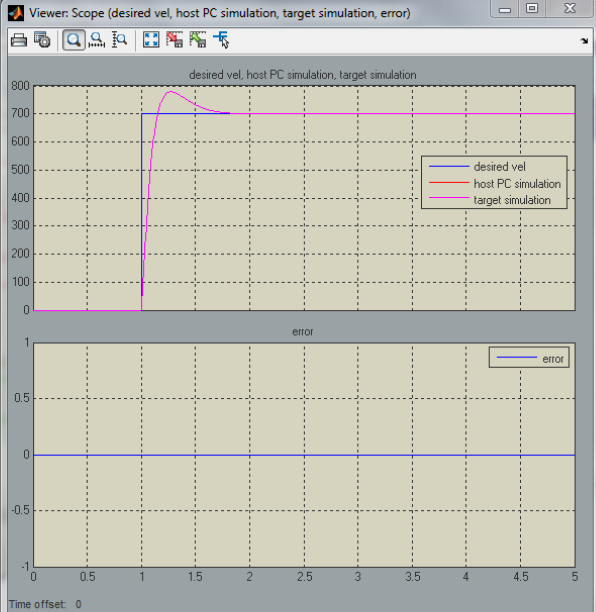 Note: the user should press re-set button on the target board every time before Run Simulation Model.